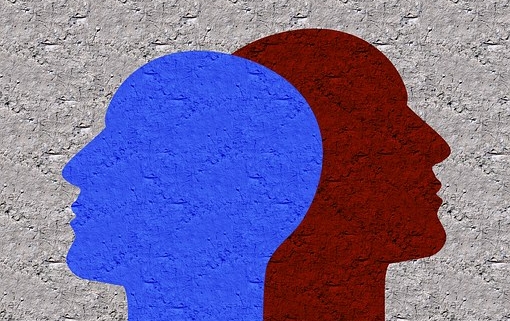 We’re all familiar with the term “split personality” and hearing it might conjure up images of the 1976 movie Sybil, whose titular character was an individual inhabited by 16 alternate personalities. Or to give a more recent example, the 2016 horror-thriller movie Split, where the main character has been diagnosed with 23 different personalities.

While these characters make for interesting studies, the fact is that we all engage in splitting. For example, I’m motivated by pain avoidance just like everyone else. But if a family member was trapped inside a burning house, I would temporarily lay aside (split off) my pain concerns and rush in to save them. Or, at least I hope I would. Splitting — most commonly thought of as a bad thing — would be a good thing under those circumstances.

Rightly understood, splitting can be normal, healthy, and necessary. Normal people can split when needed but are not confined to splitting as a way to live. They’re flexible, having the ability to shift from one way of being to another depending on the requirements of the setting. Rushing into a burning house to save a relative would be a heroic action that might put me in the news. Sitting in the middle of my fire pit while roasting marshmallows, however, would be an irrational action that would put me in the Burn Unit… and later in the Psych Ward. Normal people have the strength of flexibility.

While normal people use splitting flexibly and adaptively, Drama People split as a way of life. As my friend, psychologist Greg Lester puts it, they are confined to “one way to be.” Their only means of making relationships “work” is to live inside their preferred drama role. Lacking the ability to flex, that’s all they’ve got. Drama People have the weakness of rigidity.

For example, if I am a controlling Drama Person, I can only relate to you when I’m in control and you submit. Unlike a normal person who can be either controlling or submissive depending on the needs of the social setting, control is my modus operandi. Sure, I can pull off the appearance of submissiveness when it serves my purposes to do so, but that’s only a temporary ploy to reestablish my favored position: control.

But like an airborne virus, the splitting of Drama People spreads to those with whom they closely relate. The “success” of the relationship is predicated upon both sides playing their designated roles. If your Drama Person relates only in the role of a controller, for example, you must limit your role to that of a submitter. In other words, the Drama Person requires you to also split yourself and adopt a more limited version of you. The unspoken relational imperative is: “I need you to be whom I need you to be, even if it means altering you.” And lacking empathy, the Drama Person could care less about how you might be adversely affected.

Moreover, if you refuse to participate in the split, the Drama Person will escalate the drama in hopes that you’ll eventually acquiesce. And when and if you do, you’ve unwittingly become a lesser version of yourself. This abnormal person has coerced you into supporting abnormality. Hence, the saying: “Corrupt people corrupt people.”

In the early 1950’s, Republican Senator Joseph McCarthy of Wisconsin was one such demagogue. He was an opportunist who exploited the fears many Americans had about the influence of communism. These were the early days of the Cold War, so people’s concerns were not without foundation.

Less patriot and more showman, McCarthy took bits of information and fashioned them into a sensational narrative that placed him at the center of national attention — a position he relished. And anyone who dared to question McCarthy was cast as a willing agent of the Soviets. Open opposition to McCarthy, many elected officials concluded, was political suicide.

In this grotesque national drama, McCarthy played the role of noble crusader rescuing America from Soviet domination. Everyone else was obligated to play the role of rescued (and grateful) victims. And those who refused to do so were denounced as Soviet sympathizers or as fools who had been duped by Communist propaganda.

While most politicians feared the repercussions of opposing McCarthy, one didn’t. Republican Senator Margaret Chase Smith of Maine rose to the Senate floor and delivered the following words (as quoted from Jon Meacham’s book, The Soul of America):

I would like to speak briefly and simply about a serious national condition. It is a national feeling of fear and frustration that could result in national suicide and the end of everything we Americans hold dear. I speak as a Republican; I speak as a woman; I speak as a United States senator; I speak as an American. I think that it is high time that we remembered that we have sworn to uphold and defend the Constitution. I think that it is high time that we remembered that the Constitution as amended speaks not only of the freedom of speech but also of trial by jury instead of trial by accusation. Those of us who shout the loudest about Americanism in making character assassinations are all too frequently those who, by our own words and acts, ignore some of the basic principles of Americanism—the right to criticize, the right to hold unpopular beliefs, the right to protest, the right of independent thought.

Senator Smith persuaded six other senators to endorse her McCarthy condemnation. Expectedly and true to form, McCarthy quickly denounced them as “Snow White and the Six Dwarfs.”

Avoiding the repercussions of drama non-participation is natural but detrimental because the split self is never the better self. But refusing drama participation, while unnatural, is noble.

The opposite of a split self is the integrated self, and integrated comes from the same root as integrity.

Margaret Chase Smith took some flak but kept her integrity, and she deemed that to be worth the flak. May her tribe increase.