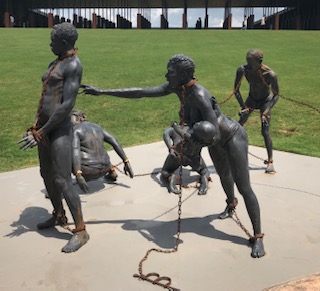 I had actually planned to skip this week’s Drama Review as my wife and I are at the beach for a few days of relaxation. But on the way here, we had a drama encounter I’d like to tell you about.

We stopped in Montgomery, Alabama to visit the Legacy Museum, a place dedicated to memorializing the sad and gruesome tale of American slavery, the Jim Crow era, segregation, the Civil Rights movement, and the ongoing influence of white supremacy. The museum is located in a building once used to warehouse enslaved people until they could be purchased as chattel by white plantation owners. Montgomery—at one point the capital of the Confederacy—and New Orleans were the two largest such distribution centers.

The museum is a multimedia, full-sensory experience that leaves one overwhelmed and struggling for words to adequately describe the experience. I’ve never been to the Holocaust Museum in Washington, D.C., but I suspect the emotional and cognitive discombobulation would be similar. Through a creative combination of written words, photographic images, newsreel footages, and holograms, the visitor is transported into a world where humans were viewed as sub-humans and treated as such.

A few blocks away, the National Memorial for Peace and Justice contains hanging boxes each of which represents a county where lynchings occurred, and written on the boxes are names of the victims. There were around 4400 lynchings in the United States that took place between the late 1860’s and the 1940’s… and those are just the ones we know about. One inscription reads, “Caleb Gadly was lynched in Bowling Green, Kentucky in 1894 for walking behind the wife of his white employer.” We saw picture after picture of hanging, burned, and mutilated blacks surrounded by well-dressed and celebratory whites.

And these things all happened, not in some foreign land where inhumanities are more commonplace, but right here among us in what we proudly call the “land of the free.” Like a nasty scar on a beautiful face, the beauty can be appreciated but the scar or what caused it must never be overlooked or forgotten. That’s why they call it the “Legacy Museum.”

The Civil War, in turns out, wasn’t an end to the drama but merely an intermission followed by another 100 years of institutionalized racism. The Jim Crow era gave whites the legal standing to keep their assumptions of superiority firmly locked in place. Nor did the drama end with enactments of Civil Rights and Voting Rights legislation. In various ways, the drama continues to this very day but behinds the scenes and in ways that are more stealthy, harder to detect, and easier to deny.

My future writing project will focus on the power and pernicious influence of complicity with collective dramas. Stay tuned.

Sorry to be a downer in this letter. Drama is such a serious subject that I always try to find the comedic elements. But there’s simply no humor in this sad and tragic story. Maybe some jocularity will return next week.