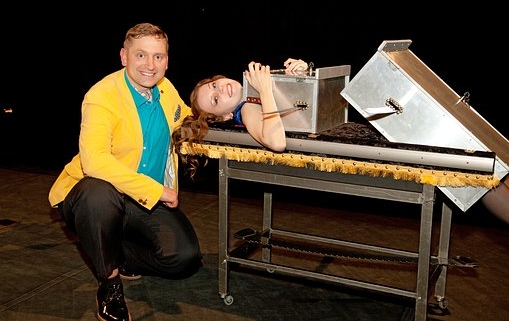 A few years ago in Manhattan, I was conducting a seminar on manipulators. That particular trip coincided with my wedding anniversary, so my wife flew up to meet me, and we spent a couple of days doing the NYC tourist thing. As a very nice gesture, our kids bought us tickets to Beautiful, a Broadway show telling the story of Carole King and
her music. We’ve always been big fans of hers, so it was not only beautiful, it was wonderful.

It’s amazing how many well-known songs she wrote, many of which were made famous by other singers like James Taylor, the Righteous Brothers, the Drifters, the Monkees, Herman’s Hermits, and Aretha Franklin. During the play, some of those songs were sung by actors portraying Carole King and other performers. It was all fabulously
entertaining.

Now, imagine this. After the show, the missus and I are walking back to our hotel and I say the following:

“That was nice and all, but I could tell that actress wasn’t actually Carole King. And the Righteous Brothers?Obviously not them. And, not only that, you could see the stage workers rolling in different backdrops to make us think they had changed locations. I mean, I enjoyed the music, but, I’m sorry, the whole thing was just so fake.”

Don’t worry… that’s not what happened. We couldn’t stop talking about how much we enjoyed it, how professional it was, and how privileged we were to be there. I had the strongest urge to break into, “I feel the earth move under my feet,” as we walked down Broadway, but that would’ve been weird. Well, maybe not too weird in New York City.

Do you know why we were able to enjoy the show so much? It was because of something called suspension of disbelief, a term originally coined by Samuel Taylor Coleridge to describe what happens in drama and literature.
Suspension of disbelief is what enables you to ignore the stage workers, get into the story, and enjoy the music. It’s why you’ll overlook the implausibility of Harrison Ford in The Fugitive diving hundreds of feet off a dam and emerging without a scratch. It’s why you’ll be entertained by an illusionist sawing a woman in half while realizing it
didn’t really happen.

When we suspend disbelief, we lay aside what we know to be true in order to experience the emotions we’d have if it actually was true. The volume of the rational brain is turned down while the emotional brain’s volume is cranked way up. In dramas, you know what you’re watching is all pretend (rational brain), but you willingly participate in the pretense for the pleasure of the moment (emotional brain). Suspending your disbelief happens with stage productions, but it also occurs in the dramas staged by manipulators. The unspoken—but very real—obligation is to disregard that which is true and participate in the manipulator’s pretend version of reality. Relational “success” is contingent upon your willingness to suspend disbelief.

I had a client once who worked for a jerk. Her boss was widely known as a magnificent person. His public persona was that of a man who was kind, intelligent, funny, and generous. But his private self was quite different. For those who worked with him in close quarters, he was temperamental, rageful, vindictive, and unrealistically demanding. For my client, every day—every minute—at work felt like walking through a minefield where the smallest of missteps could blow off a foot. Over time, being on constant guard had taken its toll on her, both emotionally and physically. She came to see me because she was worried about herself. And so was her husband.

But there was something else going on. She was constantly required in this drama to overlook her boss’s nasty traits and pretend they didn’t exist. She had to participate in a false portrayal—that her boss was indeed kind, intelligent, funny, and generous. She was required to overlook what she knew to be true and participate in a grotesque pretense,
because not doing so would likely get her fired. And having to support that bending of reality was taking its toll.

Suspension of disbelief while reading a novel, watching a movie, or attending a play is pleasurable. It’s actually good for you because it enables you to escape the pressures of real life for a while and enjoy the pleasures of make believe.

But, suspension of disbelief in real world dramas is miserable. It can cause you to lose the conscious distinction between what’s real and what’s not. It can cause you to compromise your principles for the sake of staying in the good graces of an unprincipled “other.” Your individual self can dissolve into the collective blender of those enabling the pretense. And the physical toll that takes on you can actually make you sick. In real life dramas, ongoing suspension of disbelief will mess with your brain.

*Sorry for the earlier visual of me walking down Broadway singing a Carole King song. I would suggest you go watch a movie, suspend disbelief for a while, and that mental image should fade away pretty soon…