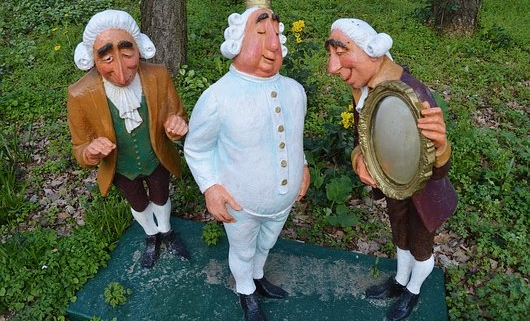 Some weeks, the subject about which I want to write is crystal clear to me. Through listening to drama tales in my office or watching dramas play themselves out in our culture, an idea floats to the surface of my brain which then makes its way down my arms, through my fingertips, into my digital thing, through that interwebs thing, into your digital thing, through your eyeballs, and into your brain. That sounds awfully invasive when it’s laid out that way. Sorry about that.

But this week, no one idea has surfaced. Like Black Friday shoppers elbowing each other to be first in the store at 4 AM, so many ideas are competing for my attention that I’ve had a really hard time picking just one. So…the first shopper I’ve decided to let in the store has to do with this: The Emperor’s New Clothes.

I actually wrote about this a while back, but I’d like to repeat it and give an example. Here’s my previous description.

We’re all familiar with the phrase, “The emperor wears no clothes.” This is derived from Hans Christian Anderson’s 1837 short tale entitled, The Emperor’s New Clothes.” You know the story…  But for those of you that need a refresher, here goes:

An emperor, who was obsessed with personal appearance, used every public gathering to show off his wardrobe. Two swindlers came along who convinced the emperor that they were master weavers, capable of making the world’s finest garments. Their materials, they explained to the emperor, were invisible to those who were either stupid or unfit for their posts. So, in addition to looking great, the emperor could use this feature to identify such individuals.

Biting the bait, the emperor advanced the swindlers huge sums of money and provided them with the finest silk.  However, they simply pocketed the money, squirreled away the silk, and pretended to weave cloth with invisible materials. But, no one would acknowledge an uncomfortable reality—no one couldn’t see the materials. And they wouldn’t admit it because doing so would imply unfitness for duty or stupidity. Imagine the emperor’s dismay when he couldn’t see the materials either.

Well, the big day came for the emperor’s parade where he’d show off his new clothes… which didn’t exist. Buck naked, he marched through the streets where everyone extolled the magnificence of his new clothes, realizing that if they didn’t do so, they’d be deemed stupid or unfit.

All was well until a small child exclaimed, “But he hasn’t got anything on.” The emperor couldn’t and wouldn’t acknowledge the now obvious reality and continued the procession with noblemen holding high the train of his non-existent regalia.

That’s what happens in a drama. You must pretend what’s there is not… or, pretend what isn’t there really is.

A client (I’ll call her Bethany) explained to me what it was like growing up in a small town with an alcoholic father. Her dad wasn’t known as the town drunk, but rather as a successful businessman. He was widely loved and respected throughout the county.

However, Bethany saw what outsiders never saw. Nightly, he’d come home from work, eat supper, take a shower, come out smelling of cologne, kiss everyone (including his wife) goodbye, and say, “See you later.” Bethany said it was just understood that you didn’t ask questions.

When he’d come in later that night, he’d be knee-walking drunk and in a rage. Before passing out on the floor or in the bed (if he made it that far), he’d scream profanities, be verbally abusive, and break things. The next morning, he’d get up in a good mood, make breakfast for everyone, act as though the events of the previous evening had never occurred, and kiss everyone goodbye. And later in the day, the cycle would repeat.

Again, the public never saw this. But his wife and children saw it as did all members of the extended family who lived a stone’s throw away. At every family gathering, people would come up to Bethany and say something like, “Your daddy is such a wonderful man and loves you so much.” And then in a whispered tone and with a pat on the shoulder, say, “And he’s doing so much better.”

Bethany knew this was hogwash and knew they knew it. And yet, she was being required to act as though what she saw with her own eyes didn’t exist. She was, in effect, being asked to pay no attention to the emperor’s nudity and play along with the pretense.

The reason this fable made its way to the top of my list is that I’ve heard so many of these drama tales in my office this week. And so many examples have popped up in our national life as well.

Here’s the moral of these stories: It’s always best to heed those voices that point out, “But, he hasn’t got anything on.”