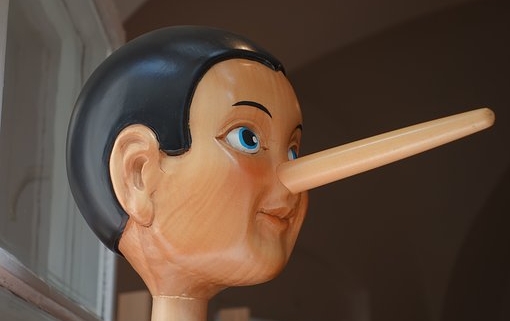 For several years, I’ve traveled around the country and presented a seminar for mental health providers on the subject of manipulators. But, due to a corporate reorganization of the company that facilitates these seminars, I’ve been off the road for several months. While I’ve enjoyed my time off, I’m happy to say I’ll be back out traveling next week.

Since my time is limited as I prepare for next week, I’m posting something I shared two years ago. It’s about the lies of manipulators. If you’re a normal person, you’re likely to believe the maxim: “Truth is your best ally.” You realize that, while the truth may hurt, it’s ultimately good for you.

With that lovely visual in mind, here’s that letter:

Click on any news site these days and before you can say, “One Mississippi, two Mississippi,” you’ll probably come across a story about the lies of some public figure, be they from the world of politics, business, sports, or religion. It’s usually a Drama Person who’s been caught lying but now denies those lies, the denial being yet another lie.

I’d like to point out three things about the lies of Drama People.

I found a quote once that I liked so much, I framed it and hung it on my office wall. It’s from James A. Garfield, the 20th President of the United States. Raise your hand if you can name a single James A. Garfield quote. Yep, just as I suspected… here’s the quote:

“The truth will set you free

but first it will make you miserable.”

You may say to yourself, “I need to lose a few pounds; I wonder how much I weigh?” You get on the scales and the number you see causes displeasure. But, it’s that very displeasure that incentivizes you to lose weight. Becoming aware of your actual weight is miserable at first, but knowing it ultimately helps you.

Drama People avoid truth by refusing to step on the scales, so to speak. As Jack Nicholson screamed at Tom Cruise in A Few Good Men, they can’t “handle the truth.” To shift metaphors, they conceal their dramas behind a veil of lies because they’re not equipped to live any other way. And should the veil get drawn back, they yank it around themselves once again.

But here’s the thing—they often believe their own deceptions. They’ve altered reality so routinely that they’ve exchanged the truth for lies. It’s a bad thing to purposely deceive others. It’s an even worse thing to inadvertently deceive yourself.

This is one of the chief reasons why we can’t “reason with unreasonable people.” Reasonable people are committed to valuing what’s true above being right. Drama People value rightness above truth. When liars get caught in lies, they double down on their lies.

Another quote I’ve always loved is from the late Scott Peck, “Lies confuse.” It’s a sentence short on words, but long on meaning.

Comedian Richard Pryor once joked about his wife catching him with another woman. He immediately denied any wrong-doing and asked her, “Who you gonna believe, me or your lying eyes?” That’s funny in a comedy routine, but Drama People seriously demand such a thing. As a prominent public figure recently stated, “Just remember, what you are seeing and what you are reading is not what’s happening.” Liars desperately need others to believe that truth-tellers are liars.

I’ve spoken before about gaslighting. The term comes from the 1944 movie, Gaslight, in which a man tries to convince his wife that she’s losing her mind. As he turns on the gas lights each night in the attic where he’s up to no good, the lights in the rest of the house dim. Whenever she asks him about the dimming lights, he tells her they’re not actually dimming; she only perceives them to be. His unspoken, but deviously intended, subtext is, “You’re crazy.”

Gaslighting is a particularly pernicious form of lying. When successful, deference to the liar’s lies overrides the trust in one’s senses. And when the validity of the senses is doubted, one feels crazy.

As I’ve said often, you “get along” with a Drama Person by performing your role in the drama. If the Drama Person in your life is a controller, for instance, the relationship “succeeds” only when you submit. If your Drama Person is a narcissist who needs admiration like the rest of us need air, you’ll get along only by lavishing praise. And if you refuse your obligation of sycophancy, you’ll be trashed and discarded.

These drama obligations are like shackles restricting the participants’ freedom. As slaves to obligation, they lose access to their integrity, their principles, their dignity, their morals, and their self-respect. A good friend of mine recently posted this warning from an unknown author:

“Don’t wander away from yourself

to get closer to someone else.”

Dramas and the lies upon which they’re staged enslave not only those required to participate, but the Drama People themselves. Like characters in The Truman Show, the drama can never be exited. They are prisoners of their own device held captive by years of rehearsal. “Oh, what a tangled web we weave,” penned Walter Scott, “when first we practice to deceive.” The tangled web ensnares the captors and captives alike.

Remember… lies enslave us, but the truth will set us free.