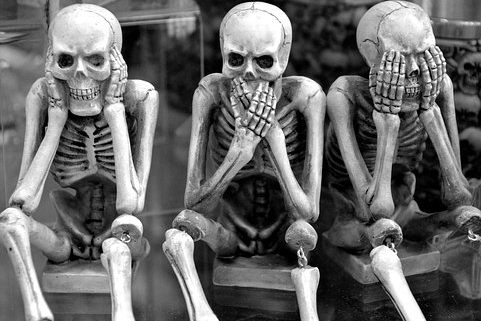 Below is a post from a couple of years ago (with some updates):

It would seem that we are witnessing a sea change of sorts where activities of sexual boundary-crossers are being exposed and collectively condemned. These predators are usually men, though there is the occasional story about some female teacher crossing sexual lines with one of her male students, for instance.

In so many of these cases, their activities had long been observable by anyone with eyes to see, but many observers chose to turn a blind eye and became passive bystanders, thus enabling the pretense. Or worse yet, some have engaged in institutional cover-up once news of the abuse came to light.

Over the last 30+ years, I’ve worked with countless survivors of sexual intrusions. Some of these violations occurred in childhood, some in adulthood. A defilement of this sort doesn’t just affect one’s body parts, it affects the self—something far more significant.

I’d like to make some observations about those on the receiving end of abuse. Below are three common conclusions drawn by those who’ve endured the personhood-violating experience of sexual defilement. I’ll be using feminine pronouns because the prevalence rate for female abuse is so much higher.

This is not an original theory—you’ve probably heard some version of it many times. When a child is abused, she naturally asks herself on some level, “Why is this bad thing happening to me?” One way to answer the question is to conclude it’s the grown-up’s fault. That’s accurate, but the implication of taking that stance becomes, “I’m a good little person living in a world controlled by a bad big person.” That’s a terrifying thought for a child.

To reduce the terror, she’ll opt to answer the question the other way—to conclude that it’s her fault. While a distortion of reality, it actually feels safer because she now inhabits a world controlled by a good big person with her being the bad one. What’s out there is good; the bad is in here, the thinking goes. The sense of control goes up and the scary feelings go down.

But from that point forward, she grows into an adult with a self-esteem constructed around a central negative core and becomes prone to thought distortions like:

This assumption-of-fault stance thus provides a short-term sense of control but leads to a long-term decimation of the self.

“I’d rather not think about it.”

We all have ways of building mental compartments—emotional hazmat containers, if you will, that seal in the toxins to keep the rest of our lives uncontaminated. A person victimized by sexual violation(s) experiences toxic emotions that she seeks to avoid at all costs.

She takes the stance of Scarlett O’Hara: “I’ll think about that tomorrow.” But when tomorrow comes, she must defer to tomorrow once again.

But most people can only kick the can down the road for so long. Sooner or later, the container starts to leak and the previously avoided emotions seep into the current experience.

Sometimes, an up-close relationship like marriage is the catalyst. Or maybe it’s becoming a parent, where she’s now required to supply to a child what wasn’t supplied to her. Or maybe hearing someone else talk about their own experience of sexual violation pops the lid and the emotions can’t be sealed off any longer. They come flowing out now even though they originated back then.

“I better not reveal it.”

People who’ve never endured abuse will sometimes wonder, “Well, why didn’t she tell somebody?” Sounds easy enough, right? There are many reasons why a given individual may have chosen not to reveal an abuse situation, but I’ll mention three.

First, there’s the reason mentioned above. “If I tell someone, it will be out of the container, and then I’ll have to feel it. But I don’t want to feel it, so I’ll just keep it to myself.”

Second, if she reveals it, she may not be believed. And being disbelieved, in many ways, can feel worse than the abuse itself.

Sometimes, that abuser has gone on to become an upstanding citizen or a widely-respected person of notoriety. Nothing hurts worse than the sound of someone saying, “I’ve known so-and-so for X number of years, and he would never do something like that.” The not-so-subtle implication? The victim lied.

But the victim has observed and experienced first-hand what others haven’t. That is, the abuser is a two-faced poser. He’s a snake oil salesman. His public presentation is nothing like his private reality. And it’s beyond painful for the victim to see gullible followers buy the snake oil. One client put it this way:

My abuser was widely known and respected in the little Southern town where I grew up. People would constantly tell me how lucky I was to be related to such a wonderful man. It never occurred to me to tell anyone because, if I did, they’d believe him and not me.

Third, some victims choose not to reveal because they understand the probable nuclear fallout. Once this information comes to light, the abuse drama will likely occupy center-stage in the victim’s life for quite some time. Some have come to terms with that reality and are ready to make the choice, come what may.

Others choose not to reveal and, for them, that may be the wisest choice. Revealing the trauma may lead to healing or, in some cases, to further traumatization. It’s a judgment call determination that each individual has to make, and there’s validity for deciding either way.