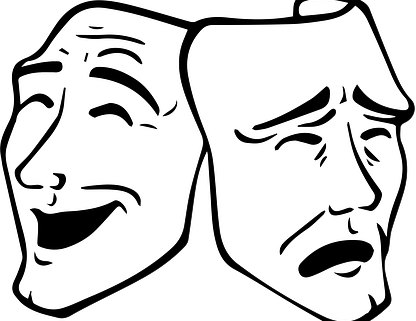 Almost everyone loves a good drama. As I’ve written so very often, dramas are fun to watch but not so fun when you’re in them. It’s one thing to sit in a theater and be enthralled by a grisly tale. It’s quite another thing to wake up in a pool of wetness, pull back the sheets, and discover a horse’s head.

The same is true for mysteries. An intriguing whodunnit is wonderful. But if a French detective detained you along with ten others as murder suspects on a European train, you wouldn’t send postcards home that read, “Having a wonderful time.”

Over the years, I’ve seen countless individuals in my office who are trying to deal with some Drama Person in their lives. That person might be a parent, a spouse, an adult child, a sibling, a neighbor, a coworker, or a boss. He or she might be someone at their volunteer organization or place of worship. Not only are these clients frustrated about having been manipulated, they’re also confused. “Why would she do that?” or “What’s WRONG with him, anyway?” are the frequently asked questions. They’re perplexed, bewildered, discombobulated, and lost in a fog of confusion.

Denver psychologist, Greg Lester, is one of our nation’s leading authorities on Personality Disorders—the more technically precise term for what I refer to as Drama People. It’s been my honor to get to know Greg over the years and I’m hoping to cajole him into writing a guest post for The Drama Review at some point. Stand by.

I heard Greg use an analogy once that turned my focus knob and cleared up my fuzzy understanding of what distinguishes a normally-functioning person from one who is personality disordered. Granted, it’s a now somewhat dated analogy. But I liked it so much that I’m going to shamelessly steal it and share it with you. Here it is:

One night, Billy Joel plays his music in a college stadium and the place comes unglued. The next night, he plays with a symphony orchestra and gets polite standing ovation after polite standing ovation. The next night, he plays in the back of a smoke-filled honkytonk and just rocks the house. Billy Joel has the ability to flex, adapt, and adjust his music to the needs of the entertainment venue. His ability to play music appropriate to the setting illustrates what we’re calling “normal.”

If you and I are normal (and let’s assume for a moment that we are), we have the flexible ability to adjust ourselves to the needs of the social environment. The traits we use in one setting may be different from those required in another. For example, when I go to a college football game, I jump up and down, scream things, eat junk food, and participate in the “wave” when it comes by. But I don’t do those things at a funeral because, well, that would just be weird. It’s not that I’m a different person in the two settings, but I can choose which aspects of me are the most socially suitable.

While a normally-wired person is illustrated by Billy Joel adjusting his music to the venue, a personality disordered person is illustrated by a player piano that has only one tune to play. Let’s say the only tune that player piano plays is the theme from Jaws. Just reading these words may have conjured up for you that low, rhythmic beat which crescendos just as the Great White bites off the legs of a late-night swimmer.

Now, place that player piano in the lobby of a theater featuring a special showing of the old movie, Jaws. People come out of the movie, walk into the lobby, hear Jaws on the player piano, and exclaim, “That is so cool. Whoever thought of that is brilliant. Playing Jaws out here in the lobby just enhances this whole experience. That’s fantastic!”

Personality disordered people lack what normal people possess—flex-ability. They’re unable to lay aside one set of traits in favor of those that fit the setting. Like a player piano confined to a single tune, “They have only one way to be,” as Dr. Lester likes to say.

For example, a controlling man becomes an infantry officer where he commands troops, wins battles, saves lives, and gets decorated. That’s wonderful. But he can’t turn it off when he goes home at night and dominates his wife and children. That’s terrible. Whereas a normal person could lay aside dominance in favor of gentleness, the personality disordered person is like the player piano with only one tune to play. Their one-way-to-be works wonderfully in one setting but terribly in another.

This answers a question frequently asked by confused drama participants in my office: “How can he/she be so wonderful over there but so terrible over here?”

That’s because the Drama Person lacks flex-ability. And that’s confusing.