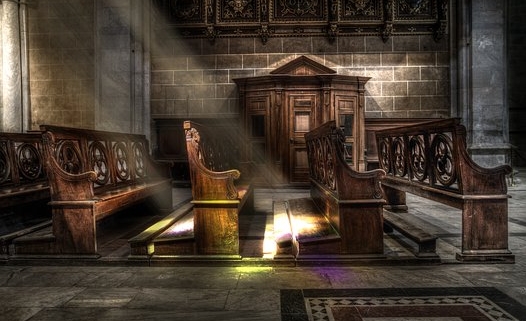 We spent five wonderful years in Portland, Oregon where I did my graduate school training. As you know, it rains a lot in Portland. Even though we get more inches of rain per year here in Nashville, Portland leads the nation in the number of hours per year that it rains. In other words, it drizzles. One of their mottos is, “Portland: We Don’t Tan, We Rust.” With the amount of rain we’ve had in Nashville this week, we could arguably adopt that slogan as our own.

As you are no doubt aware, the news is chockablock these days with stories of sexual violations. It’s become an all-too-familiar saga: A powerful person exploits a less powerful person to gratify himself sexually. “I’m going to use your body without your informed permission to make my body feel good,” the thinking goes. This is simply barbaric.

Perhaps this cruelty’s most egregious version is the predatory pastor. At this moment, our nation’s two largest religious bodies (the Catholic Church and the Southern Baptist Convention) are embroiled in scandals involving abuse and systemic cover-up. Ministers exploit their positions to cross the sexual boundaries of those entrusted to their care, and when the violations are revealed, what sometimes follows is image management and damage control. But the reek of barbarism can’t be covered over with the perfume of religiosity. The stench will always break through.

Over the years, I’ve met with numerous clients trying to pick up the pieces of lives shattered by ministerial sexual abuse. Often, they’re dealing with a two-part trauma. Part One is the initial violation. Part Two is response from others when Part One is brought to light. Like a hurricane that causes initial wind damage, the larger destruction often results from the storm surge that follows.

While there is no shortage of information out there about the destructive aftermath of sexual abuse, I’d like to ever-so-briefly survey the damage resulting from both parts.

Part One: The Initial Violation

A minister is one who publicly promotes ethics and personal morality as well as leading a congregation. But the predatorial pastor is one who privately violates the very ethics he or she promotes, creating an irreconcilable incongruence. This leaves the victim struggling with the mind-bending question: “Why would a good person do something so bad?” There are essentially two ways to answer this question.

The first way reflects reality: “This perceived-to-be wonderful person is actually a hypocritical sleazy person. They’re a wolf in sheep’s clothing. The badness is in them.”

The second way reflects a distortion: “There’s something about me that made an otherwise good person do a bad thing. Therefore, the badness must reside in me.”

Victims of sexual abuse are most prone to answer this question the second way because it’s so difficult to conceive of a godly person doing something so ungodly. From that point forward, therefore, the target constructs his or her self esteem around a central core of badness, and the internal dialogue becomes:

What happened must never be revealed because: 1) No one will ever believe me, and 2) People will then realize what a terrible person I am.

The abuser damages, not just the outer body, but the person’s fundamental sense of self.

Part Two: The Response from Others

If the initial violation ever comes to light, the revelation is initially met with disbelief because, just like the victim, it’s difficult for others to conceive of godly people doing ungodly things. And if the perpetrator has a stellar public reputation, which many do, the community may have a hard time choking down news of the revelation. They are most inclined to think:

How could a person who’s spent a lifetime doing good do such a bad thing? I don’t believe it. That so-called “victim” is either lying, crazy, or has sinister motivations.

This knee-jerk response of others confirms the victim’s Fear #1: “No one will ever believe me.”

Just as the victim is prone to reconcile the incongruence by internalizing the badness, outside observers may reconcile it the same way—by assuming the victim is the bad one. And that confirms the victim’s Fear #2: “People now realize what a terrible person I am.”

Is there any wonder why victims of ministerial sexual violations have little to no incentive to ever reveal anything about the abuse to anyone?

What Needs to Be Done?

Fortunately, numerous groups are working diligently to develop good answers to this all-important question. I’m already over my self-imposed word limit for this letter but I’d like to quickly mention three things that come to mind:

First, religious bodies should guard against the natural human tendency to “circle the wagons” and protect their own. Forget the wagons and care for the wounded.

Second, stop calling the motives of victims into question. Whenever I hear someone smugly proclaim, “Well, I just think it’s awfully curious that he/she waited 30 years to say anything,” the top of my head feels like it’s going to blow off like the pre-eruption peak of Mount St. Helens. If you can’t understand why it took 30 years to reveal, go back and read “Part One: The Initial Violation.”

Finally, separate predators from their prey. There are far too many cases of perpetrators leaving one place only to prey upon unsuspecting victims in other locations.

Fortunately, these and many other steps are currently being implemented by serious-minded religious leaders. However, they haven’t done enough, and they need to do more.