If you’re like me, you’d be hard-pressed to come up a satisfactory description for 2017. What’s a word for non-stop drama? And thus far, it seems like 2017 is the gift that keeps on giving to 2018.

It’s an old story, to be certain, but one that’s been regrettably downplayed or ignored, often under the “boys will be boys” rationalization. What’s new is the ubiquity of exposure. Like crab grass in my summer yard, sordid tales of sexual exploitation are emerging from their hidden places into the public consciousness on a regular basis. Just heard a new one this week about a youth pastor and a teenage girl. For a variety of reasons, walls surrounding the conspiracy of silence covering up sexual violations are starting to crumble. A crumbling that’s long overdue, I might add.

Here are some observations I’ve made from talking to countless women over the years whose sexual boundaries have been crossed, either as children or adults. Each violation has its own variations, to be certain, but I’ve noticed several aspects that are common to the experience.

I was waiting for a plane once and a fellow traveler in the gate area asked me if I’d watch his luggage while he went to the rest room. That was odd, I thought, because he placed his trust in someone he didn’t know. If he’d returned to discover all of his stuff gone, that’d be maddening but it would’ve made sense because, after all, he trusted a stranger.

But what if the violator is a trusted friend? “How can this previously looked-up-to person violate me for his own selfish purposes?” “I thought he was this way, now I find out he’s that way.” The incongruence creates a state of confusion that overloads our neurons.

The picture below has made its way around the Internet so you may have seen it already. It’s a mind-bender. It’s the staff of Auschwitz. Here they are laughing and frolicking on a shift break before returning to their work duties of mass genocide. Do you have a hard time getting your head around this picture? I do. 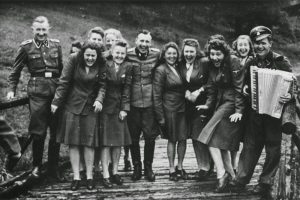 Women who’ve been sexually violated by trusted others have a similar quandary. “I gave him my trust, now he’s taken my body.” How do you put those two things together? They don’t fit. Like the picture, it’s beyond confusing.

Most of the sexual violation stories I’ve heard are of men exploiting women. I did have a male client once who’d been gang raped in the remote area of a public park. He told me, “What I still can’t understand is why I didn’t fight back. It was like I couldn’t move. My body just wouldn’t do what my head was telling it.”

For many women, the sexual defilement is the first violation. The second violation occurs later when someone (usually a man) asks, “Well, why didn’t you fight back?” the implication being that she must’ve been complicit in some way. On an emotional level, the second violation may feel worse than the first.

The short-term effect is that the world does feel safer if the “good” people are in charge. But the long-term effect is to inject time-released cognitive toxins into the child’s self-esteem such as:

No matter how old the victim may be when the violation occurs, such self-deprecating effects are quite common.

We all compartmentalize. Indeed, a certain level of compartmentalization is healthy and necessary. If I see a child being attacked by a pit bull, I’ll run the risk of getting bit to save the child. It’s not that “pain don’t hurt” as Patrick Swayze boasted in Road House, but I’ll compartmentalize my potential pain to meet the needs of the moment.

Sexual violation is physically painful at the time of occurrence but also causes long-term psychic pain. The most common way to cope is to compartmentalize the pain so it doesn’t have to be felt.

One of the most invalidating, minimizing, and de-humanizing statements an abuse survivor can hear is, “Well, if it happened 40 years ago, why hasn’t she said something about it until now?” The not-so-subtle implication being: she probably just made it up. The asinine statement meant to indict the survivor reflects, instead, on the idiocy of the one saying it.

The opposite of compartmentalization is integration. The conditions are becoming more favorable for women to share their experiences (many for the first time) enabling the puss pockets containing the psychic toxins to be lanced, cleaned out, and healed.

The “me, too” hashtag is providing validation to many women that they’re not alone. It doesn’t fix everything nor does it make everything all right. But it’s an important step in the right direction.

May the crumbling of the walls continue!