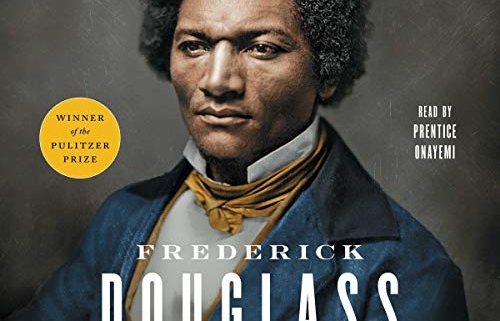 Image is from the cover of David Blight’s book, Frederick Douglass: Prophet of Freedom

One of my great joys is to walk the greenway trail where I live while listening to books on Audible. I’ve listened to novels, to the biographies of various historical figures, and to books about history, culture, faith, the social sciences, and politics. This practice kills two birds with one stone: it exercises my body and educates my mind.

Right after starting a new biography a few weeks ago, I posted on Facebook that I thought this would be one of the most consequential books I’d ever read. I’ve finished it now and my prediction was accurate. It’s called Frederick Douglass: Prophet of Freedom by Pulitzer Prize winning author, David Blight. In print form, it’s 912 pages. On Audible, it’s 37 hours long. That translates into 127 greenway miles. You’d think I’d be in better shape by now.

Born into slavery on the eastern shore of Maryland, Frederick Bailey escaped into the slave-free state of New York where he adopted Douglass as his new last name and spent his pre-emancipation years as a fugitive slave. He was self-educated and became the most widely influential abolitionist of the antebellum era.

Before and after the Civil War, he fought for the rights of people of color using his most effective weapon: words. He was a prolific writer who traveled thousands of miles giving thousands of speeches. The way I envision Douglass from Blight’s description, he had the voice of James Earl Jones, the mind and moral clarity of Martin Luther King, the oratorical persuasiveness of Winston Churchill, the imposing physical presence of an NFL linebacker, and the comedic timing of your favorite stand-up comedian. He would have audiences doubling over with laughter before they left in tears.

Though Douglass was himself a man of faith, he railed against the hypocrisy of churches who were complicit with the evils of slavery and white supremacy. Here’s just one example of his damning yet influential rhetoric:

“The slave auctioneer’s bell and the church bell chime in with each other, and the bitter cries of the heart broken slave are drowned in the righteous shouts of his pious master. Revivals of religion and revivals in the slave-trade go hand in hand together. The slave prison and the church stand near each other.

The clanking of fetters and the rattling of chains in the prison and the pious psalm and solemn prayer in the church may be heard at the same time. The dealers in the bodies of men erect their stand in the presence of the pulpit, and they mutually help each other. The dealer gives his blood-stained gold to support the pulpit, and the pulpit, in return, covers his infernal business with the garb of Christianity.

Here we have religion and robbery the allies of each other–devils dressed in angels’ robes, and hell presenting the semblance of paradise.”

Douglass rose from nothing to become a modern-day prophet who rebuked the United States for not living up to its founding principle of all men being created equal. This former slave became an adviser to presidents and was afforded diplomatic status. His fame was worldwide, and he was the most photographed individual of the 19th century. He truly was a world historical figure.

I’m telling you all this partly as a tribute to Frederick Douglass but primarily to preface my main point. That is, Douglass was a Drama Resister. The drama of his era could be described this way:

Our role (white people) is to be in charge; your role (black people) is to submit to our control. As long as we all stay in our roles, we’ll “get along.” But be advised, if you refuse your role, there’ll be a price to pay.

Douglass experienced that price first-hand, having scars on his back to prove it. His former slave masters and later Jim Crow white supremacists were the terrorists of their day who terrorized their subjects into submission, and as long as that subjugation was allowed to continue, nothing would ever change. Douglass refused his obligatory role of passive surrender which set the stage for change to occur, even though it took a civil war and another 100-year battle. And as any person of color would testify, the battle is not yet fully won.

“Those who cannot remember the past,” said the oft misquoted philosopher George Santayana, “are condemned to repeat it.” What lesson can we learn from life of Frederick Douglass?

Dramas only succeed when the participants stay in their roles. Dramas are disabled when those who are in them refuse to participate. Drama resistance will likely be painful, but the pain of staying in will ultimately exceed the pain of exiting.

All dramas require us to pick our pain.