I once heard someone say that if you want to develop patience, spend lots of time at the Department of Motor Vehicles. I would simply add—or airports.

For me, traveling provides opportunities for developing various character traits.  An airport—any airport—is like a petri dish in which I’m forced to grow qualities like patience, delayed gratification, anger management, or the restraint of homicidal impulses.

And I’ve been forced to develop empathy.  I don’t get that upset anymore with airport personnel because I think, by and large, they’re doing the best they can with what they’ve got.  I watched an impatient traveler not long ago chew out a ticket agent over a weather delay. He gave that agent a piece of his mind he could not afford to lose—and did it loudly. This is where my enhanced homicide-restraint ability came in handy. The guy was being a world-class jerk but I felt sorry for the agent.  I could put myself in his place and imagine what he must be feeling. That’s called empathy, the fourth of our “reason muscles.”

A normally-wired, empathic person’s stance is: “It bothers me when my wrongness hurts you.” But the empathy-deficient drama person takes the stance: “I’m only bothered when you hurt me.”

And if he’s not bothered by his negatives, why would he bother to change them?

When a person lacks empathy, we use derogatory—but accurately descriptive—phrases like, “It’s all about him,” or “The world revolves around her.” Empathy-deficiency is what causes a guy to chew out a ticket agent for a weather delay.  It’s all about him.

But empathy-strength is what causes a parent to tell a child, “This is going to hurt me more than it hurts you.”  Empathy is what enables you to feel heard, to feel understood.  “It’s impossible to over-emphasize,” said Paul Tournier, “the immense need (people) have to be really listened to, to be taken seriously, to be understood.”

Empathy is what Addicus Finch from To Kill a Mockingbird was talking about when he told Scout, “You never really understand a person until you consider things from his point of view . . . until you climb into his skin and walk around in it.”

The Golden Rule is a description of empathy— “So whatever you wish that others would do to you, do also to them.”  Or to put it another way: Treat people like you want to be treated.

I’d like to tell you an empathy tale, a true story of someone who personified the quality better than anyone I’ve ever known.  And that’s high praise because I’ve known some Olympic-level empaths. Bear with me as I’ll need to give you some backstory before telling you about this person.

I was born and raised in Jackson, Mississippi, during the era of those nasty Jim Crow laws. Jackson was a magical place to grow up—if you were white.  But if you were black, not so much. It was a racially segregated culture in which blacks and whites lived on opposite sides of town.

Like a tattoo containing the name of a girl you no longer date, there are certain mental images you wish would go away but never will.  I distinctly remember my mother taking me downtown to a department store to buy clothes.  There was a column in the store with a drinking fountain on one side with a sign above it that said, “Whites.” That fountain was all shiny and clean.  On the other side of the column was a fountain with a sign above it that said, “Coloreds.”  That fountain was filthy and grungy.  Sometimes, I wish there was a button I could push to delete that image from my brain.

Black maids who worked for white families always entered their houses through the back doors, never the front.  And when their duties were done, they’d sit on the back of the bus returning them to their side of town.

For whites born in Jackson during that era, reminiscing about childhood would likely conjure up warm feelings and pleasant memories.  Reminiscing blacks might have pleasant recollections as well but theirs would be interspersed with discrimination memories—back doors, filthy fountains, restricted access, and racial epithets.

We’ve been talking about what it takes to be in a relationship with a drama person.  The unspoken set up of dramas between individuals is: My role is this and your role is that.  As long as we stay inside of our role obligations, we’ll “get along.”

Jackson back then was, in many respects, a collective drama.  The unspoken—or sometimes loudly spoken—arrangement was: Our role (whites) is to be in charge and your role (blacks) is to do what we need you to do and be who we need you to be.  As long as our two races stay inside of those role obligations, we’ll “get along.” For Jackson during those years, being black in a white culture meant “knowing your place and staying in it.” That was the drama obligation.

But there’s something about all this that’s very hard to put into words. Despite the inequities, the injustices, and the wrongness of it all, there existed a warmth of connection between some blacks and some whites.  Prejudice sat alongside affection and neither was forced out by the other. “The test of first rate intelligence,” said F. Scott Fitzgerald, “is the ability to hold two opposed ideas in mind at the same time and still retain the ability to function.”  Prejudice and affection don’t normally occupy the same space and yet they did somehow.  I’ve seen two movies that illustrate so very well this hard to fathom incongruence.

The first was Driving Miss Daisy.  Miss Daisy was a rich white woman being driven by a poor black man.  She was up and he was down. And yet, a bond of affection developed between the two of them that led her at one point to say, “Hoke, you’re my best friend.”  Granted, this wasn’t a reciprocal friendship in all aspects but Miss Daisy felt closer to Hoke than to her own son.

The second movie was The Help.  Interestingly, the setting for the movie was the very Jackson neighborhood in which I grew up.  Central to the plot was Aibileen, a black woman who served as a maid and nanny for a white family.  In so many ways, Aibileen was the mother to the four-year-old girl that the child didn’t have in her own biological mom.  She would affectionately hold her on her lap and repeat what became a mantra of sorts: “You is kind, you is smart, and you is important.”  Yes, Aibileen was “the help” who came to work through the back door. But she came through the front door of this girl’s brain and lovingly shaped her self-esteem for a lifetime.

So, that brings us up to the person I’d like to tell you about.  Chiny was my Aibileen.  Her full name was China London, a black lady who was my grandmother’s maid and cook for 40 years.  Everybody loved Chiny—grandparents, parents, aunts, uncles, cousins, family friends.  For a person whose circumstances warranted very little cheeriness, she was the cheeriest person I’ve ever known.

Most every Sunday, we’d all eat at my grandmother’s house where Chiny cooked.  There was nothing like it. In my family, the highest possible praise for a food dish is to say, “This tastes like something Chiny cooked.”

I was the youngest of ten cousins.  When you’re the youngest, it’s easy to get overlooked and overrun.  I usually felt that way.  I’m sure it wasn’t done maliciously but, whenever I’d try to say something in this large brood of relatives, somebody in the room would talk over me. I’d wait my turn, try again, and it’d happen again.  And again.  And again.  My frustration would build so much that I could almost pop. (Just a thought, maybe this was the early beginnings of my homicidal impulses. I should explore that).

But whenever my frustration would reach a fever pitch, I’d look across the room and see Chiny looking at me, smiling. That’s an image I never want deleted from my brain.  She had noticed what everyone else had missed.  She never said a word about it but her look spoke volumes. It was as though she was saying to me,

I see you and I can imagine how you must be feeling right now. You’re feeling ignored and disregarded.  Believe me, I know what that feels like. I’ve lived in a one-down position all my life. Just know that somebody in this room sees it and gets it.  Oh and by the way, you is kind, you is smart, and you is important.

Amazing, isn’t it, how much can be communicated by a single look. Chiny was displaying empathy.  In that moment, she had climbed into my skin and was walking around in it.  The person in the room who deserved empathy more than anyone else was dishing it out.  Chiny’s character was more delicious than her food. That’s why I say that Chiny is the best example of empathy I know.

I don’t know how this works but I’m pretty sure that when I get to heaven, Chiny will be living in the exclusive Heavenly Heights area.  I’ll probably be assigned to a residence across town in the less prestigious and somewhat densely-populated Hellview Pointe subdivision. I’ll probably ride the bus across town every day to work in Chiny’s yard and to be her help.

But, knowing Chiny, I bet she lets me come in the front door. 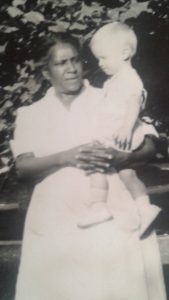